A few months ago, I was inspired by this post on Reddit, titled: Food items should have QR codes that instruct the microwave exactly what to do. Like high for 2 minutes, let stand 1 minute, medium 1 minutes..

I thought this was a pretty cool idea, and that it would be a fun project for a Raspberry Pi. I agreed with the people who thought using UPC barcodes would be better, since products already have them, so I went with a barcode scanner + online product database.

Here’s a summary of the features that I’ve added to my microwave: 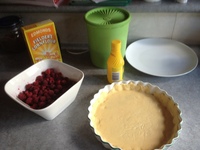 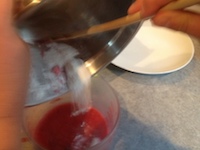 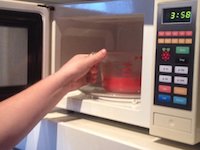 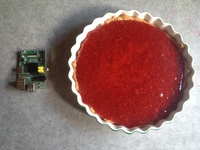 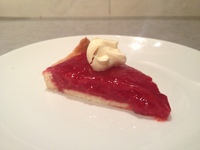 Keep reading below if you’re interested in electronics or software:

I used a microwave with a touchpad, and discovered that the touchpad was a button matrix. I took photos of the touchpad and traced the wires, so that I could tell which pins corresponded to which buttons. 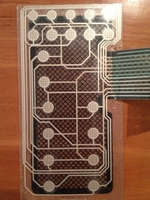 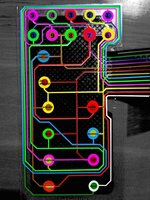 I initially wanted to put everything in a case outside the microwave, but I decided that it would be more challenging and fun to try and fit everything inside. Here’s all the PCB revisions, before I settled on a design that would fit neatly on top of the microwave’s original PCB. 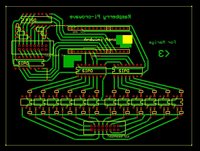 Here’s the final product after transferring toner, etching, drilling, and soldering. (I had to use the ribbon cables to save space.) 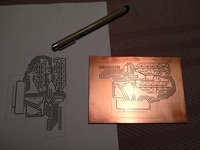 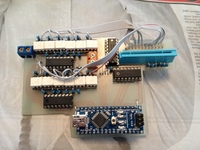 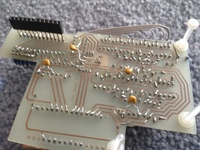 And here’s how it fits on top of the microwave controller: 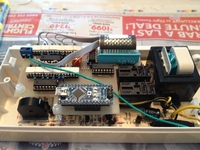 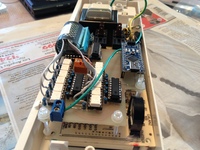 When I peeled off the old touchpad overlay, it became wrinkled and ugly, so I thought I may as well have a go at redesigning the interface. My goal was to get rid of the features I don’t really use, and make the basic functions more convenient. The top two rows of buttons are now dedicated to “one touch” cooking times, for either “high” or “medium” power. You can also set the time and power manually. 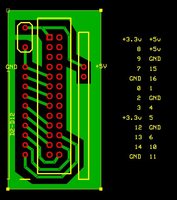 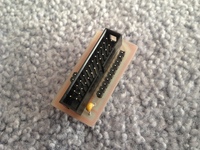 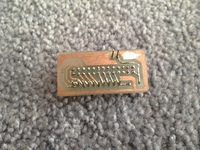 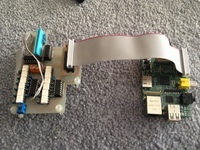 The Raspberry Pi is powered by a USB hub, which is also plugged into the Raspberry Pi’s USB port. To power the hub, I wired up a power adapter to the microwave’s power source. There’s also a USB powered speaker, USB microphone, wifi adapter, and barcode scanner. 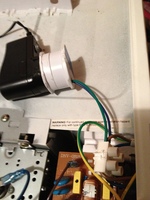 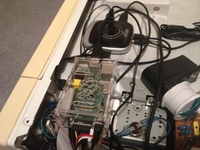 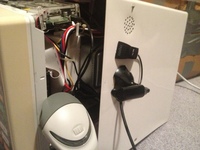 All the software running on the Raspberry Pi is hosted at: https://github.com/ndbroadbent/raspberry_picrowave.

There are 4 main components:

This runs the code that listens for touchpad button presses, and controls the microwave. It also accepts TCP connections so that other programs can send commands or request information about the microwave’s status.

This program listens to the barcode scanner, and requests product information from the Microwave Cooking Database. It also runs the cooking programs.

I used PocketSphinx for voice recognition, which worked very well with my small corpus. I embedded Ruby in the pocketsphinx_contiunous C program, so that it would be easier to script voice commands and send commands to the microwave daemon. It turns out that the acoustics of my kitchen seem to mess up the recognition, so it won’t be used very often.

There’s a simple sinatra web application that lets you control the microwave from your phone or computer. This may not be a big selling point. It uses a JavaScript EventSource to push updates to the browser, so you could have hundreds of users connected to your microwave at once.

If any barcodes are scanned that can’t be found on the Microwave Cooking Database, this webpage will display the unknown barcodes and provide a link to add the new product.

I couldn’t find any existing websites with a database of microwave cooking instructions, so I made one. 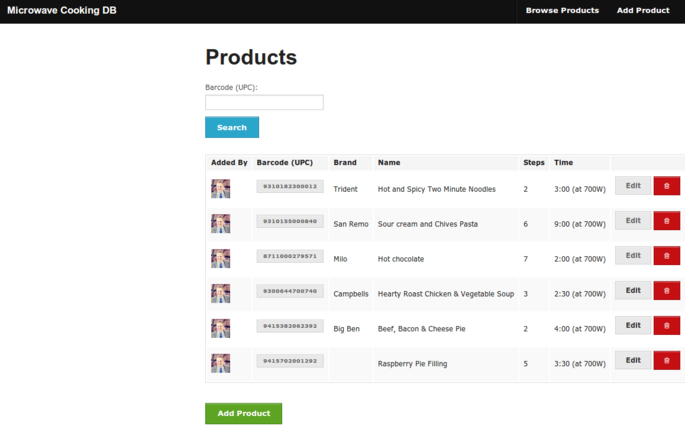 (UPDATE: It used to be live at https://www.microwavecookingdb.com/, but I let the domain expire. Sorry!)

So if you’re also planning on making an internet connected microwave with a barcode scanner, please feel free to sign up and add some products.

Nope, this is just a fun project. Microwaves with barcode scanners already exist, and most of these features are already patented.

I’d be interested to hear if you do something similar, or make use of https://www.microwavecookingdb.com.

Open files generated by ‘rails generate’ in your editor