10 Reasons why Hackers should Jailbreak their iPhones

There was a post on the front page of Hacker News recently, titled “Making Chrome better on iOS”. Google’s Chrome browser is now available on iOS, and the author of the article was talking about how app developers could be persuaded to add some code to their apps which would allow Chrome to open links.

Restrictions like this (not being able to change your default browser) are one of the many reasons why I wouldn’t buy another iPhone if it couldn’t be jailbroken. It also seems strange that ‘Hacker News’ readers don’t appear to be very excited about ‘hacking’ the incredible device in their pockets.

We don’t need to ask developers to support Chrome when we can just change the default browser ourselves: 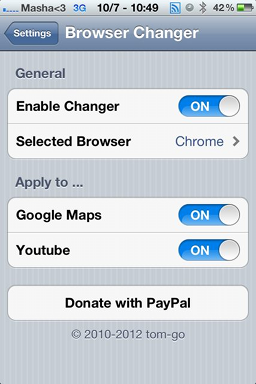 You can find the “Browser Changer” package on Cydia.

Here’s 9 other reasons why a jailbroken iPhone is better than any other mobile device:

The Grooveshark iPhone app was removed from the App Store, so you can only install it on a jailbroken iPhone through Cydia. 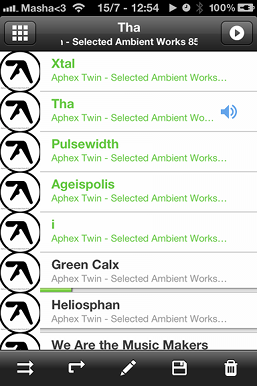 The ‘Grooveshark Anywhere’ plan is required if you want to download unlimited albums and songs to play offline, but it’s well worth the $9 per month. It’s definitely a replacement for iTunes, so it’s no wonder that Apple feels threatened.

Note: I also tried Spotify for a week when it was released to New Zealand, but I found that Grooveshark has a much bigger music collection.

Having SSH access to your phone opens up a lot of possibilities. For example, I use capistrano to deploy iPhone apps and Cydia packages while I’m developing them. I can also SFTP into the iPhone’s filesystem, and use Ubuntu’s file browser to copy and paste files.

Plays anything you can transfer to your iPhone. Another great app rejected from the App Store.

It’s pretty neat to have a terminal on your phone, even if I don’t use it very often. You never know when you might need to restart or rollback a remote server: 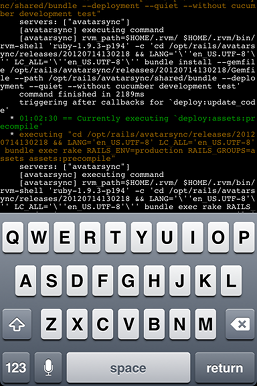 This is an incredibly useful shortcuts menu, displayed by swiping the status bar: 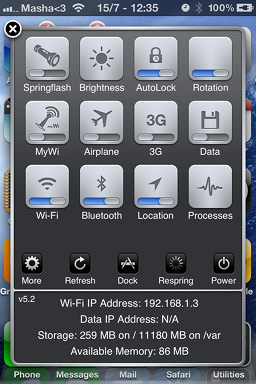 The AutoLock control is really handy when using the Maps application. I use Maps as the GPS for my car, and I don’t want the screen to turn off while I’m driving.

I bought the MyWi package while using a 3GS. It’s pretty expensive at $19.99, but it was a lifesaver when I was living without DSL for a few weeks. I’m still using it after getting a 4S, since iOS 5’s ‘personal hotspot’ feature was a bit flaky. MyWi is rock-solid, and can display a small icon instead of taking over the entire status bar like the iOS hotspot.

This is just my personal preference, but I like having 5 icons in my dock and home screen.

No $99 developer license required. One example is the Last.FM app, which is open source, but not available in NZ or HK iTunes stores. Here’s a decent list of some other open source iPhone apps.

Finally, and perhaps most importantly, it’s just awesome to be able to script the phone to do whatever I want. For example, I can make the iPhone change the wallpaper every 30 minutes, show my prepaid balance in the status bar, or scroll up and down a page when it tilts.

Add .bashrc to iPhone for SSH or MobileTerminal